Color Balance
A Soundtrack For Gender, Race, and Ethnicity in Movies

This song was created using data on gender, race, and ethnicity of actors and actresses featured in the last decade of blockbuster movies. The goal of this song and visualization is to give an intuitive and visceral understanding of how different groups of people are represented (or underrepresented) in mainstream Hollywood movies.

You can also explore the data in an interactive web interface here: 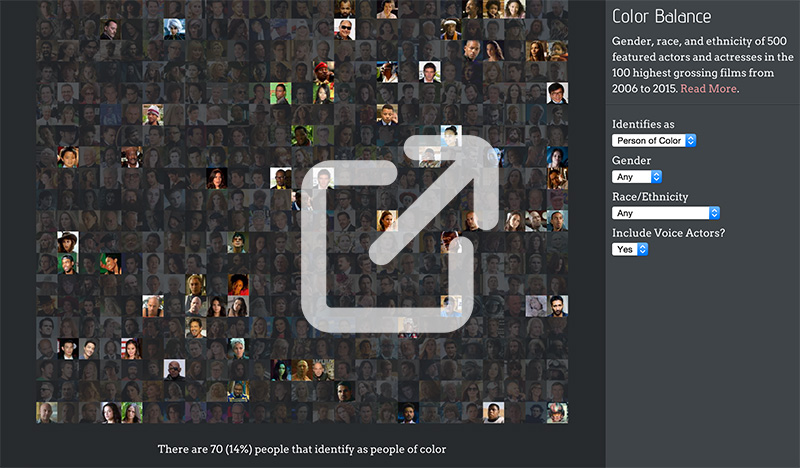 This song and visualization was particularly challenging for a few reasons. First, the data I was looking for was very hard to find. Though there are a number of reports that are published about gender, race, and ethnicity in movies, there are little to no free, reliable, and open datasets with this type of information, particularly how actors and actresses identify in terms of race or ethnicity. The result was a lot of manual research on my part.

Given that, the next major challenge is that it is very hard confidently identify someone's race. First, there is a the question of identity. Someone can be half black and half white, but may identify as either black, white, mixed race, or simply a person of color. Though many sources give information about a person's racial background, they rarely give information about their racial identity.

For the above reasons and for the purposes of this song, I decided to focus on determining if individuals identified as people of color or not, rather than try to categorize by race or ethnicity. The data is not perfect, but for sake of transparency, I listed all the data sources I could find in this public spreadsheet. I encourage you to send me corrections or improvements to this data. I created an interactive way to explore the data which contains notes for each person.

The last thing I'll say about this is that, despite all the challenges of identification, one thing we cannot deny is what we see on screen. The bottom line is that many individuals don't see people who look like them in popular media. There may be a few cast members with complicated racial or ethnic backgrounds, but as a whole, there are obvious imbalances of genders, races, and ethnicities in popular media as compared to the actual demographics of our country.

Given all the caveats above, let's dive into the data. Here is the high-level approach of how I chose the data:

Essentially I wanted the gender/racial diversity of these blockbuster films to control the sonic diversity of the song. Here is a high-level view of how the song is composed:

This song was challenging given that if the diversity of the data controls the diversity of sound in the song, the song will sound bland and repetitive when movies do not have a lot of diversity (which is true.) My goal then was to find sounds and genres that work well as repetitive or bland.

I found Brian Eno's Music For Films, a conceptual music album intended as a soundtrack for imaginary films. The album consists of 18 short tracks, mostly ambient with a broad sonic palette. Sonically and conceptually, I thought this was a perfect fit. Soundtrack music is often ambient and atmospheric in nature and is meant to support, not overpower, the scene. Thus, it may be perceived as bland or repetitive (like the data) when experienced alone.

Here are some of the samples that I took to create this song:

This song was algorithmically generated in that I wrote a computer program that took data and music samples as input and generated the song as output. I did not manually compose any part of this song. I used Python to crunch the data, ChucK to sequence and build the song, and Processing to generate the visualization.

For those interested in replicating, adapting, or extending my process, all of the code and sound files are open source and can be found here. It also contains a comprehensive README to guide you through the setup and configuration. The following is a brief outline of my process: