This song was generated by tracking the land loss in Coastal Louisiana over 78 years due to man-made levees, drilling and dredging for oil and gas, and climate change. The song's instruments stretch and diminish over time as more land becomes displaced with water. The data has been provided by the United States Geological Survey (USGS). The song uses sound samples from the Rebirth Brass Band, a New Orleans brass band.

Coastal Louisiana wetlands make up the seventh largest delta on Earth and contain 40 to 45 percent of the wetlands found in the lower United States. Coastal Louisiana also supports the largest commercial fishery in the lower 48 States and is home to half of the country's oil refineries that serve 90 percent of the nation's offshore energy production.

From 1932 to 2010, coastal Louisiana has undergone a net loss in land area of about 1,900 square miles, making it one of the fastest-disappearing areas in the world. This net change in land area amounts to a decrease of about 25 percent of the 1932 land area. If this loss were to occur at a constant rate, it would equate to Louisiana losing an area the size of one football field per hour.

This loss of land has largely resulted from human mismanagement of the coast. Artificial levees block spring flood water that would bring fresh water and sediment to marshes. Swamps have been extensively logged, leaving canals and ditches that allow saline water to move inland. Canals dug for the oil and gas industry also allow storms to move sea water inland, where it damages swamps and marshes. Rising sea waters caused by climate change have also exacerbated the problem.

Without human damage reduction and active restoration efforts, coastal communities will continue to disappear and leave the region. Since the coastal wetlands support an economically important coastal fishery, the loss of wetlands is adversely affecting this industry.

The Data & Prior Work

This piece was largely inspired by Losing Ground, a comprehensive interactive web project and map of land loss in coastal Louisiana created by ProPublica and The Lens. The satellite imagery in the song's visualization was also provided by NASA/USGS Landsat via Losing Ground.

For the purposes of this song and visualization, I focused on the southeast tip of the Louisiana coast (includes areas Leeville, Grand Isle, Buras, Venice, and West Bay where the Mississippi River empties into the Gulf of Mexico) which shows some of the more dramatic losses of land of the period of time covered by the USGS report. The following image is a visualization of the land area change datasets, where each color represents loss or gain in each of the 17 datasets. 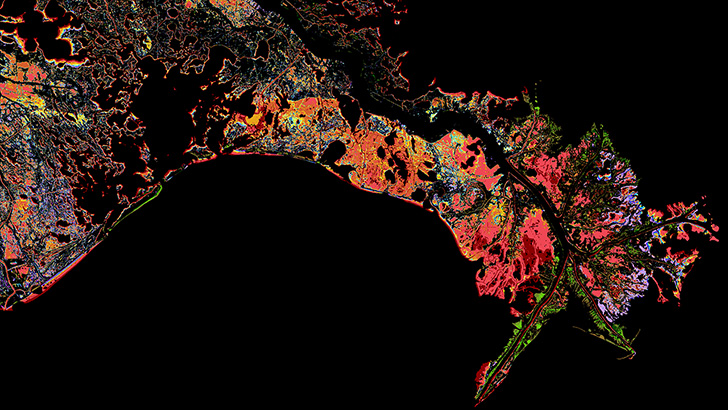 Generally speaking, shades of green indicates land gain. All other colors (red, orange, yellow, blue, violet) indicate land loss at different time periods. Black or gray indicate persistent land or water (no change). Here is another way to look at this data with a bar chart: 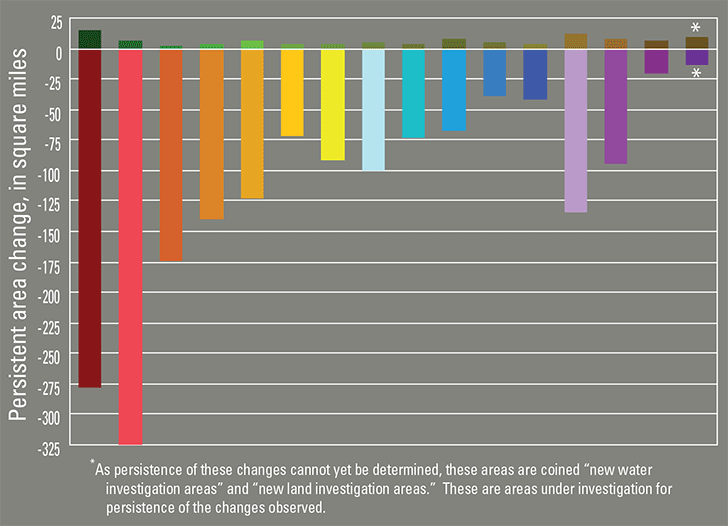 You can download the full report and view the data to learn more.

The song composition is entirely algorithmic and is composed of the following building blocks:

The song exclusively samples the 25th Anniversary performance by the Rebirth Brass Band, a New Orleans brass band. I thought the band and genre would be appropriate for this song because the tradition of brass bands have existed in New Orleans, Louisiana since the late 19th century. The Grammy-winning Rebirth Brass Band was founded in 1983 in New Orleans' Tremé neighborhood, and known to be one of the first bands to combine traditional New Orleans brass band music with funk, jazz, soul and hip hop. I thought that the energy and excitement of the band's music would provide a good contrast of sound as the instruments and vocals deteriorate throughout the song. There are 18 samples that I use in total, each of which are under one second long. Here is a list of samples used in this song:

I use the Paulstretch algorithm to stretch the samples between 2 and 8 times longer than their original length (e.g. 1x , 2x , 3x , 4x , 8x ). I prefer this method of stretching sound clips because it uses "spectral smoothing", which allows for extreme sound elongation without degrading the quality/texture of the original sound.